If walls could talk,
the Auldgirth Inn would no doubt
have more than a few tales to tell.

Five hundred years old, the inn stands at a key junction for travellers up and down the Nith valley.

It has witnessed technological developments come and go, from the days when folk travelled only on foot or horseback, to the arrival of the coach,  the railway line  and now the car – the Inn has seen them all.

Who knows how many influential people have graced its interior over the years; probably hundreds. We do know that one of its most famous regulars was Scotland’s national bard, Robert Burns whose iconic verse “Auld Lang Syne” is sung across the globe at New Year.

The Inn Burns used, when he farmed at Ellisland about four miles to the south in the late 1700s, would not have been all that different to the main building we see today. In 1804 it went through a major refurbishment, carried out by the then owner, William Copeland of Collieston, a nearby estate.

An advert appeared in the Dumfries Weekly Journal of February 28 that year seeking a new landlord -“only industrious and reputable people need apply”.  It described the inn as “near the bridge on the great Turnpike Road”  and “where the drove roads for cattle and sheep cross to Lockerby and the English Border, free of toll”.

The inn came with a forge and five and a half acres of ground.

And the refurbishment had been made at “considerable cost”. 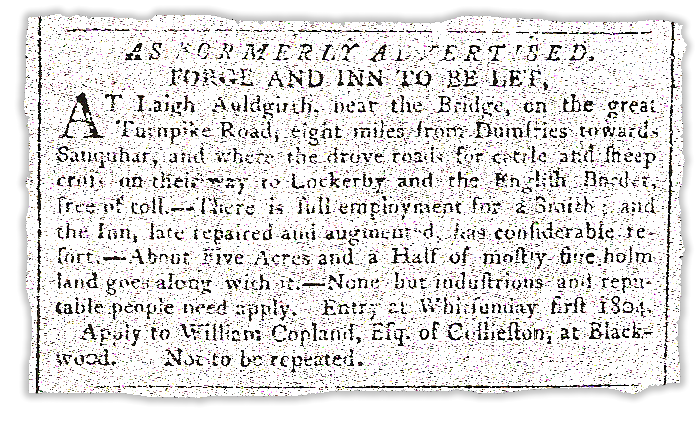 Advertisment featured in the
Dumfries Weekly Journal
on 28th February 1804 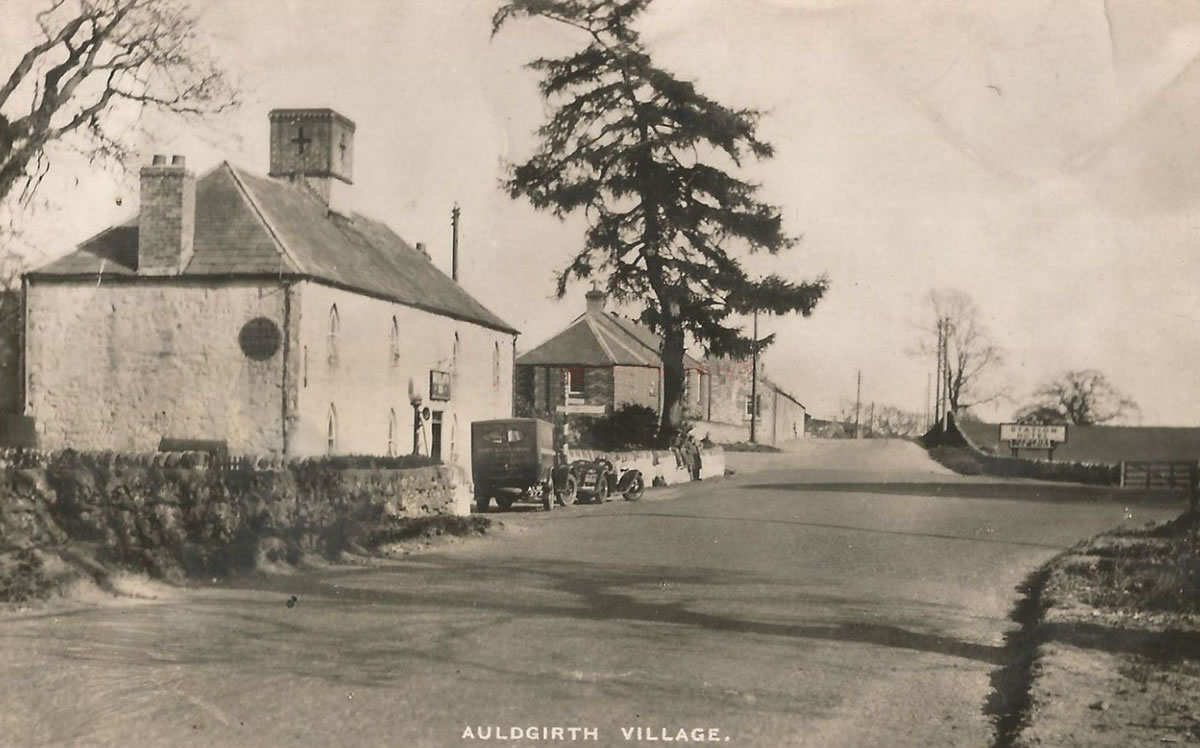 The workmanship must have been excellent because, in 1971, Historic Environment Scotland  gave the Inn  Category B listing status noting the main building dated from circa 1800.

It wasn’t recorded who the successfull applicant was but it may have been the Imrie family who appeared in the first, 1841 census. The business was supporting landlord William Imrie, who was 45, his 40-year-old wife Agnes, their six children, 23-year-old Henrietta Douglas, an agriculutral labourer who must have worked the five and half acres, her young son John and 30-year-old William Smith, the ostler who would have been busy with the horses pulling the coaches.

When the first valuation roll was publised in 1862  landlord David Imrie was paying an annual rent of £50, about £5,500 in today’s figures.

By all accounts the Auldgirth Inn has religion to thank for it’s very existance. First reports indicate it began life as a half way house for the monks of Melrose travelling to Whithorn on Pilgrimags. Nearby Friar’s Carse is said to have been gifted to Melrose Abbey in 1215 and it seems Cistercian monks may have lived at Grange Mill there for some time. There is a story that they used the site of the Inn as a retreat.

Of course the site of the Inn could tell even more stories, tales of Druids and Romans. The name Auldgirth itself has its origins in the mists of time amongst the mystical high ranking religious leaders of the ancient Celts. A sanctified  Druid’s house – “Bal-Auchin” – stood in the area of Cairn Farm, a mile or so north of the Inn. The name is, perhaps, preserved by the Ballochan Burn that runs into the River Nith and the Ballochan Linn railway viaduct near the village . The Gaelic word “girth” means a sanctified circle, in Druidic times a stone circle which offered sanctuary to someone being pursued by those intent on murder. A Druid’s house had to stand nearby to prevent a bloodthirsty pursuer ignoring the rules.

The Romans spent some time in the area. They built the first real road alongside the river and had a small fort at Barburgh Mill, just north of the village. 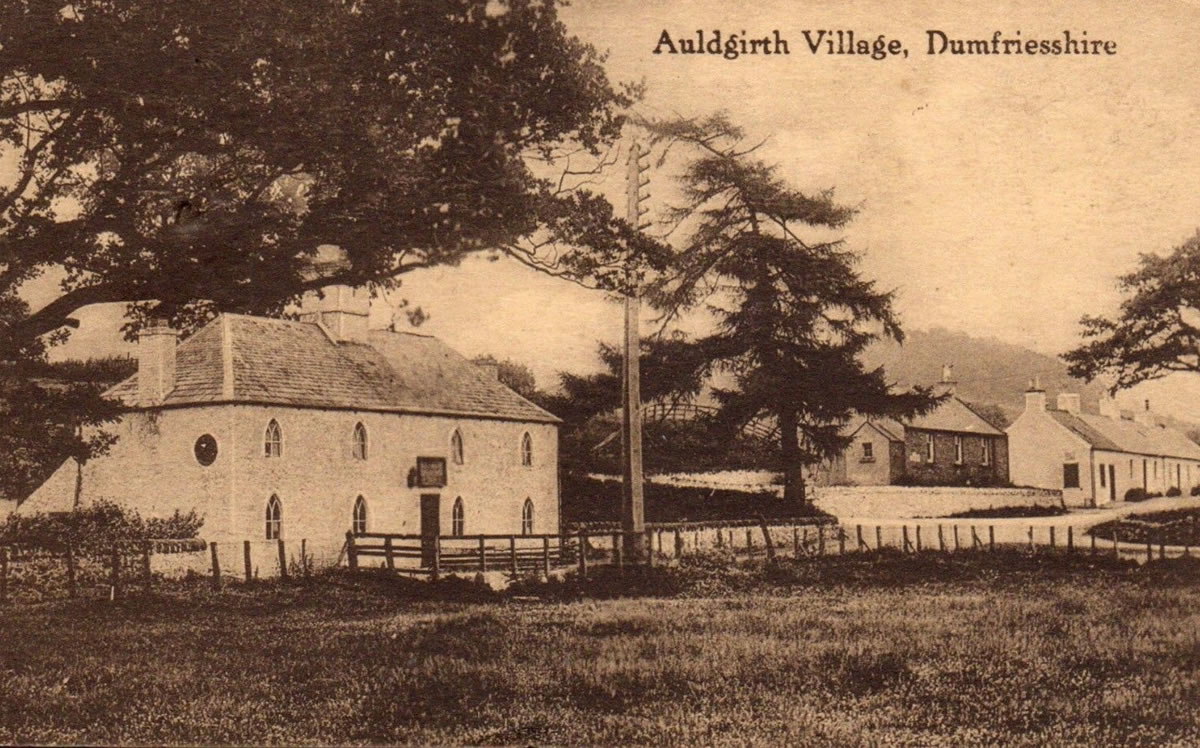 Unlike today, the early roads north from Dumfries lay on the eastern side of the River Nith, the easier side to bypass the steep sided gorge where, on the opposite bank, ancient Tibbers Castle stood. The road ran  through Dalswinton whose ancient castle belonged to the Comyn Family. It was from there that on the morning of Thursday, February 10, 1306, John “The Red” Comyn set out for his fatefull meeting with Robert Bruce in the Church of the Grey Friars in Dumfries. In a heated argument Bruce stabbed and killed Comyn, an action that started the so called Wars of Independence and eventually lead to an independent Scotland.

In medieval times there was an important hospital at Sanquhar and those visiting would have  passed through Auldgirth.

Auldgirth itself appears to have originally been two farms, High and Low Auldgirth. First records appear in the early 1500s and, at the time and for centuries to come, agriculture was a labour intensive industry so it’s likely there would have been a number of houses in the area around the Inn.

At some ten or so miles north of Dumfries, the Auldgirth Inn was perfectly placed as a key stopping point for horse drawn coaches which would have taken several hours to bump their way along muddy, uneven, potholed tracks. There may well have been a ford nearby where animals and people could cross the river safely. The first stone bridge was built in the 1780s and the modern version, carrying the A76 trunk road in the 1970s.

So, Auldgirth Inn is so steeped in the history of the area, it is a veritable story in itself.